I took a closer look at the grapevine today; they are starting to put out buds. It’s great to see that they are still alive, as they are only one year old. What is not great is the soil, its very dry and full of clay. I don’t know what is going on this property 😉 It will definitely take some years before we have healthy mould to grow in, provided that we leave all our vegetable scraps in the composting box. (If you want more organic waste for you compost, just ask friends and family you trust, if you can have their waste. Admitted, it’s gross. But what do you want the most – steril hands or great vegetables?)
I decided to give the grape trees a good start of the year with water from the new rainwater tank. 150 litres were collected so pressure was beginning to build up. It is a strange feeling to look at the gathering clouds thinking “Yes! More water.”, instead of the usual complaining. It took only 5 seconds to fill up a 10 litres bucket from this big tank. I watered each grapevine with 20 litres in 2 minutes. This is nice 😉 Now let’s grow some grapes. 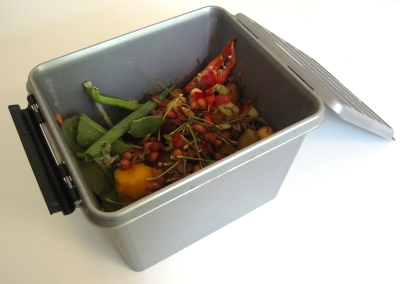 I’m starting up new beds in the garden this year. The problem we will be facing is that the soil is full of clay. I don’t know why it is that way in this area, but some “healing” needs to be done. Therefore I bought a small plastic box to be used for organic waste and put it next to the sink in the kitchen. We’ve been using it for a couple of weeks now, and it’s amazing to discover how much of our garbage is able to go into that box and on to the composting box outside in the garden. We eat a lot of vegetables, and the parts we can’t eat get cut off and put in the small box. It’s peels and scrap from onions, carrots, potatoes, apples, leeks etc. So please worms, get up and do your thing so we can have something to mix into the clay later on 😉 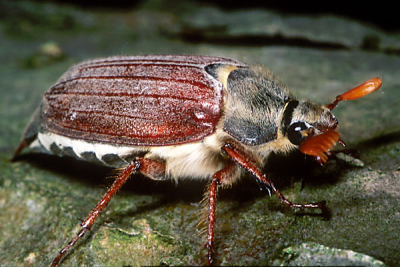 About two weeks ago I was digging away on the new bed for potatoes and onions, and I began to notice quite a few bugs in the dirt. They were about 3 centimeters long and almost 2 cm across and started to wake up and crawl around when the soil was turned. I estimate that there were about five bugs per square meter, when the soil was turned to a depth of 30 centimeters.
I’m a little worried what those bugs will do to the potatoes, so I picked one up and carried it over to one of the neighbours to find out if she knew more about the species. The sun was shining and the weather was great for garden work, so she was outside too, preparing a bed for potatoes. She has been living here for decades, and I hoped to hear some history from her.
She didn’t know for sure what species the beast was, but she made a guess that it was a cockchafer. Her mother, who is also interested in gardening, confirmed that it indeed was a cockchafer.
It’s brown with wings, and it has antennas on its head. I found out that in the 1800s the state would actually pay per bug that was killed and turned in, indicating that it was a major plague in Europe. They managed to control the spread, but the bug has had a comeback in 1980s. The cockhafer is clever: it begins its life as far as 1 meter down in the ground, making it impossible for the birds to prey on it. The adult bug crawls up to the surface 4 years later.
I guess it would be best for my gardening to collect the rest of the bugs I dig up and feed them to the birds.

I kept all of our grocery receipts for 31 days in order to make a qualified guess on how much we would need to produce if we were to become self-sufficient and living from home-grown food. I multiplied the numbers by 12 to make an estimate for a year of food consumption. It was quite an eye opener… Here are the numbers for two persons for one year. These are the things that we have a decent shot at making ourselves:

It seems like we should be focusing on growing tomatoes 😉 (or be more creative in our choice of food). 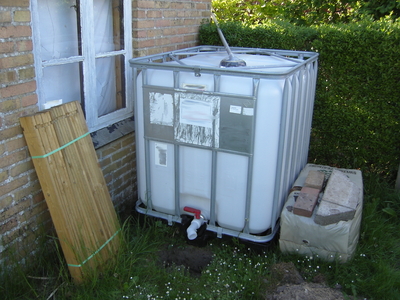 When I bought this property I threw out some old stuff from the garage, including a rain water barrel. I never thought I would be doing much in the garden, but now I regret that I threw it out. So today I borrowed a trailer and went and picked up a 1000 litres tank from a horse farm in the countryside.
It’s bigger than I imagined and we could barely lift it over the hedge. One tank of water amounts to about 40 DKK (8 USD) so it could turn out to be quite an amount saved during the season. It’s connected to the roof of the garage which is about 20 m2. There is height difference between north and south of the garden, so I hope no pump will be needed. 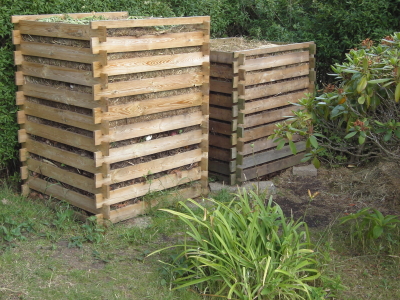 Yesterday I decided to move the compost bin as part of the bigger plan we made for the garden. It has been standing in the same spot for about 1½ year and it was like reading a story when it was turned over. There were very distinct layers down through the pile, some layers almost finished turning into mould and some layers looking like they were left there a few days ago.
My point is that you should try to mix the garden waste as much as possible and make sure that the pile is wet enough. It’s like a living thing that will get hot when it is transforming waste properly. In the bottom I found hundreds of sticks of bamboo, perfectly preserved. I think they acted as a very good barrier from the soil beneath, so that the worms couldn’t spread upwards in the pile. Not the intention at all. Doh! It seems like a good idea to turn the pile even though it will take half a day. If the alternative is no mould at all I guess there’s really no choice.
My girlfriend started building a fireplace in the ground so that we will have a nice place to gather around at night. Mostly for fun but it will also rid us of the big braches from the trees which are unfit for the compost bin. It would be nice to have an axe to cut up the smaller brances for composting. I found long branches in the old pile and it’s hard to work with so branches should be cut to about 5 cm max. 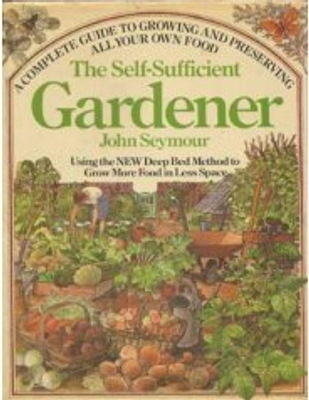 Once you taste fresh picked fruits or just harvested vegetables from the garden there’s no turning back. It’s a whole other world than the pesticide covered pumped up things transported on stinking trucks for days. If you want to learn more about growing your own stuff I recommend “The Self-Sufficient Gardener” by John Seymour. It’s amazing how much knowledge he managed to get into that book, from soil analysis to bee-keeping. He wrote a lot of other books on self-sufficiency, but for now this is the only one that has managed to find its way to me. It has even been translated to Danish. 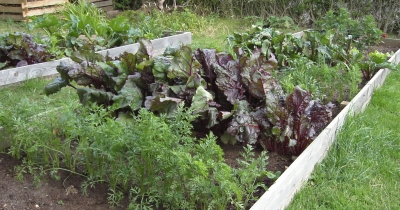 Here’s a list of the vegetables and fruits I’ll be growing in my garden:

It’s a live list so more will be added. I live in Denmark and I have already managed to grow carrots, squash, peas, radish, lettuce and spices. This year I’m looking forward to see if the peach tree will bear fruit. Last year we had a tremendous amount of apples from four old apple trees. I need to find a better way to store them though, there’s no need to feed the worms straight from the tree 😉

Where do you live and what will you be growing?