He has been growing fruits and vegetables for four years now together with his wife Joyce. They preserve part of what they grow in a root cellar and they even have enough to sell some of it at the local market. Propagation by seeds, cuttings and root division is a big part of their gardening lifestyle. This year they’ll be keeping bees for the first time. 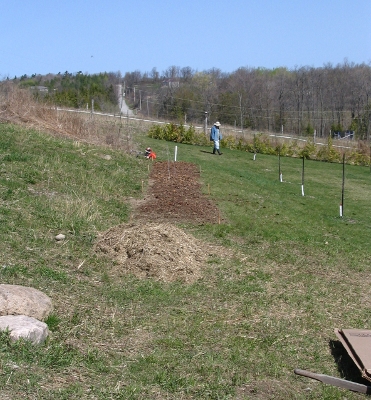 In which part of Canada do you live, and what is your hardiness zone?

South central Ontario, 157 km north east of Toronto, zone 5a or 4a if you use the USDA hardiness zones.

How old are you, and how long have you been growing food?

Why did you abandon your previous gardens?

Just the demands of life at the time – children, a demanding corporate career, moving.

What would you estimate the age distribution to be among people growing their own food?

Very interesting question. I was at a Seedy Saturday on Sunday, Mar 13 and age distribution was from young parents with babies to quite elderly seniors as the pictures show. It’s not so much the age distribution as it is the numbers which are increasing at an explosive rate if events like this and seed sales are any indication.

What drives you to grow your own food? 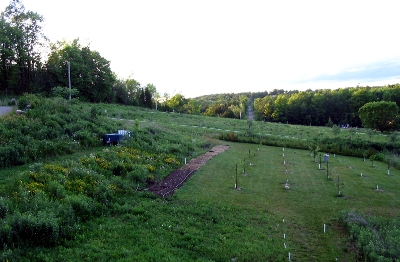 We had a vague idea about growing perennial flowers and vegetables. Then along came the financial mess of 2008 and I looked more closely at the fragility of all systems including food distribution & production. I didn’t like what I saw so food – growing, preserving, and propagating became a large and growing part of the garden.

Do you have any good sources of information about food security, i.e. distribution and production?

Not really. I don’t actively follow this line of thinking. I find that there’s a great deal of talk and analysis but not much in the way of solutions and even less in the way of doing.  Because of a just-in-time delivery system, supermarket shelves carry about 3 days worth of food.  To put that another way, we are 9 meals  from anarchy. Is that fragile? I don’t know but I prefer not to take a chance. Similarly, there is immense consolidation and concentration in food production, e.g. chickens. I don’t do much digging into this because I see the same pattern repeated over and over again.

Do you mostly propagate from seeds or cuttings?

Vegetables tend to be seeds although perennial vegetables will be by root division. Trees and shrubs depend on the species and variety.  They tend to be mostly cuttings but some are seeds.

Do you have anyone to help you in your garden?

My wife, Joyce. It’s a team effort. I tend to start most of the seedlings that require starting under lights but Joyce takes care of the direct seeded vegetables. The fruit orchard is completely hers. She did/does the research, the ordering, the hole digging and planting, the spraying. I tend to be the one who sources new vegetables to grow. She’s the one who is interested in herbs, mostly culinary but also beginning medicinal. There is no reason for this division of labour. It just seems to happen this way.

What type of grow lights are you using, and where do you get them from?

I much prefer these to the old long tubes: 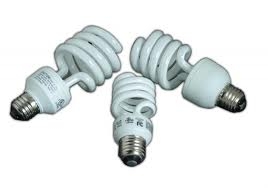 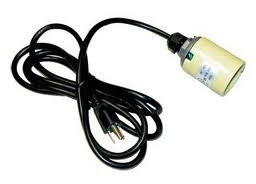 I can position them exactly where I need them.  They store very well.  And they are cheap. I’ve never seen much difference between the ordinary fluorescent and the grow lights other than the price.  I leave them on for 14 hours a day.

I’ve had problems with seedlings growing long and thin. How much light do you give your seedlings? Do you control the temperature?

Yep. Long and thin is a problem.  I try not to start too early since that tends to make plants long and thin.  I use a bottom heated seed tray with the plastic plant cells.  With care, I can re-use them.

What kind of vegetables and fruits are you growing?

In a cold climate, food isn’t much of a problem in the summer. You eat straight from the garden and can have a steady stream of food all summer long. Of course, that depends on how long your growing season is.  Ours is around 125 days from last frost around May 18 to first frost around Sept 20. Because winters are the problem that’s what we tend to focus on. From there, we looked at the easiest way of preserving large quantities of vegetables for an extended period of time which is root cellaring. So we grow carrots, parsnips, a number of varieties of winter squash, beets. 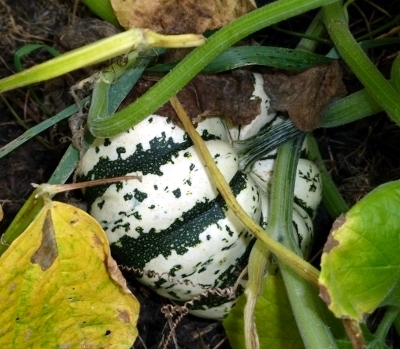 And because we like to experiment – salsify, Jerusalem artichokes, Chinese artichokes, scorzonera. And we grow a number of varieties of tomatoes for canning and freezing whole. For summer vegetables, we grow salad greens including spinach.  We eat a lot of salads during the summer. We also grow a number of perennial herbs such as salad burnet, lovage, and oregano and summer herbs such as basil and cilantro. All get eaten fresh and all get dried for the winter. 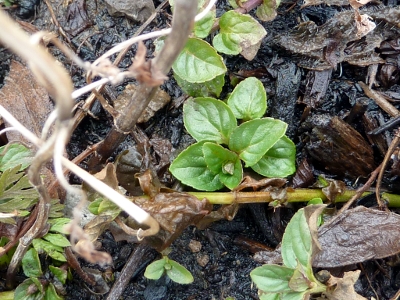 (Chocolate mint in the spring)

Joyce’s orchard has cold hardy plums, pears, apricots, and heritage apples. The trees are all dwarf or semi-dwarf because they produce fruit much earlier than standard trees. Last year we added, mulberries and hazel nuts as well as cold hardy peaches. We have two peach varieties – Bailey and Chui-Lum Tao from Golden Bough Tree Farm. Both are rootstocks. We’re hoping that they provide us with peaches for canning. 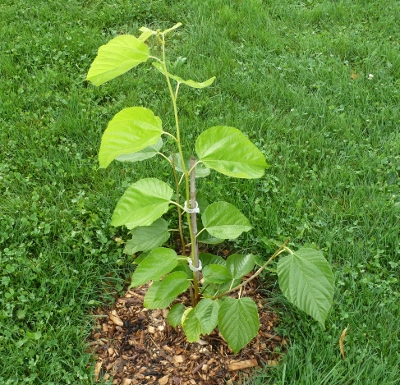 We’ll be grafting one of the wild apples that we found in our woods. Because of the difficulty of finding rootstock in Canada, I’m propagating some of the rootstock I did find so that I have a steady supply. 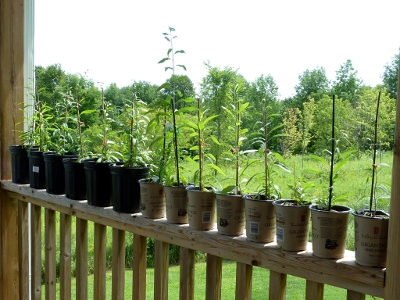 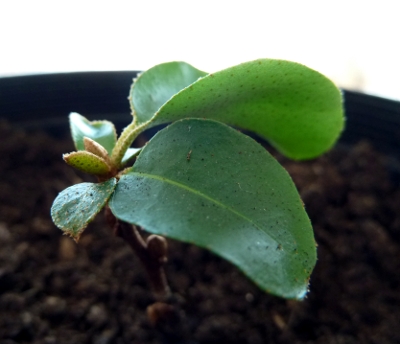 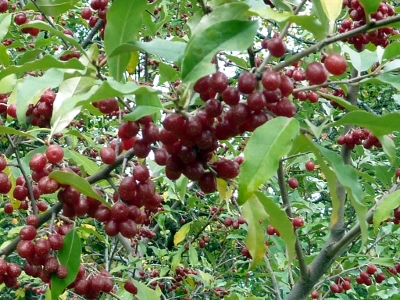 We have Bluejay and Reka blueberry varieties. We haven’t focused much on them because we have a very large pick-you-own berry farm near us. I was able to propagate some from cuttings but managed to kill them by not giving them enough winter protection while they were still small.  They aren’t a high priority because the particular requirements of growing them.

This year we will be tip layering wild blackberries, raspberries, and gooseberries that we found on the property last year and moving them to more accessible locations. We also harvest wild grapes for jelly. Joyce makes large quantities of jams and jellies which she sells at our local market each Saturday from late May through early October. $4.00 a jar except for the wild grape jelly which is $5.00.

From a food security point of view, we will be experimenting this summer with a couple of crops – soybeans and black oil sunflowers.  Nutritionally, soy has lots of energy, a wide range of vitamins and minerals, good fats, and minimal bad fats. It stores very well. It’s a nitrogen fixer which means that I add to rather than deplete the soil. And its range of food usages is extensive. We’ve already managed a palatable soy beverage which works wonderfully in coffee and to make soy yoghurt. 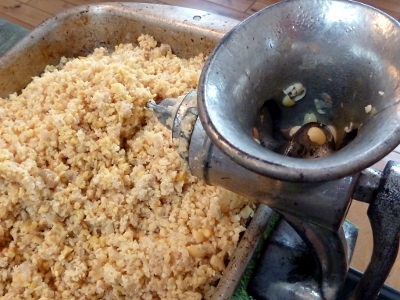 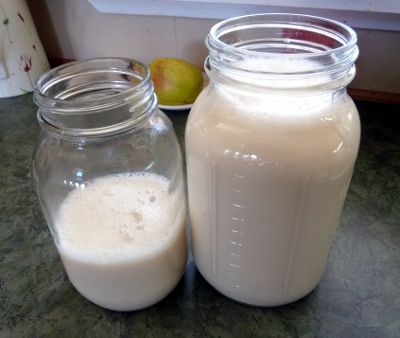 We’re growing the black oil sunflowers to see if we can get a decent harvest. If we do, we’ll probably invest in an oil expeller and try making sunflower oil. That would give us a cheap and easy source of cooking oil.

And we will be keeping bees this summer using a topbar hive instead of the more conventional Langstroth hive that you see everywhere. 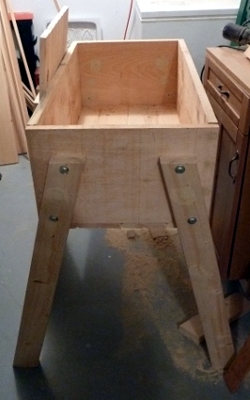 Joyce has already been able to substitute honey for sugar in one of her jellies and she’ll be experimenting with others this summer as the different fruits come into season.

What advice would you give to people growing in colder climates?

Don’t get hung up on technology such as poly-tunnels. It’s expensive and difficult to maintain and will become increasingly so because of its oil component. Look to cultures that deal with cold climates and see what they were growing before World War II. 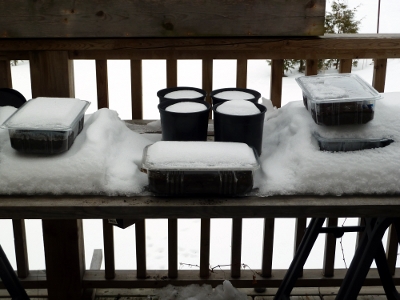 Most survived on root vegetables. Look to grow hardy perennial vegetables such as Jerusalem artichokes, wild leeks, wild onions, Turkish rocket. Look at your weeds with a different eye. Use cold frames tucked up against the warm of your house foundation on the sunny side of the house to extend the season and possibly over winter tough greens like spinach. Look for unusual varieties of vegetables such as long keeper tomatoes. We have some from last year that are sitting on our kitchen counter ready to be eaten whenever we choose. We’re actually going to see how long they last. 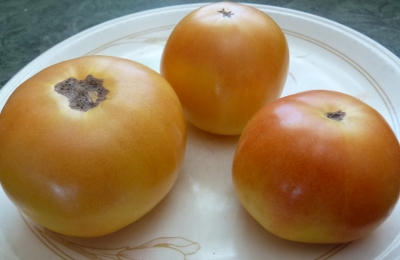 How do you choose what seeds to use in your garden, and where do you get them?

The seeds have to be organic and not hybrid. That insures no GMO’s or seed treating. Hybrid means that you can’t save seeds and have them come true (assuming you use the necessary seed saving techniques). We also like heritage seeds because of the varieties that exist, the taste, and the fact that they’re likely to be hardier. Up until this year, we haven’t saved seeds. It was on our list but not that high since there was always next year. That’s no longer the case because we will be growing some vegetables that may not have seeds available next year. Either off the market or not available to us in Canada. In particular, Altrei Coffee because it is a rare seed and Laura soybeans because we can’t get them directly from the US anymore. We’re also helping to grow out a couple of varieties from Dan Jason’s Seed and Plant Sanctuary for Canada. So we’ll be saving seeds from everything that we grow this year.

Do you spent a lot of time planning what to do next in your garden?

What else is there to do during the winter?? Actually, we realized this year that our gardening season lasts all year. The winter is reserved for reflection and research. The garden itself doesn’t get a great deal of planning. The garden talks to us and tells us what to do next. This isn’t as silly as it sounds. Gardens are very complex and dynamic. You do one thing in the garden and that often leads you to a lot more things. For example, two or three years ago we had a terribly poor winter squash harvest.  We had lots of flowers but little fruit. That meant a lack of pollinators.  So we started thinking about keeping bees. The research led to all kinds of ideas that we could integrate into what we’re already doing, such as substituting honey for sugar wherever we could in our day-to-day diet.

What advice would you give to people who want to experiment with raised garden beds?

Don’t get too hung up on what you surround the plot with but don’t use pressure-treated wood unless you isolate it from the soil with vapour barrier. Don’t cut corners on the soil mix.  Either use pure well-aged compost or build your own using Mel’s formula. 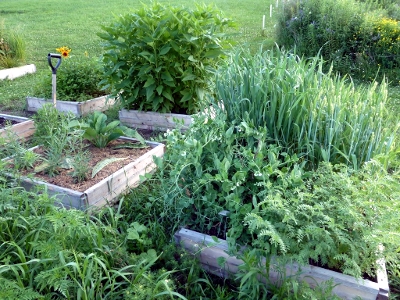 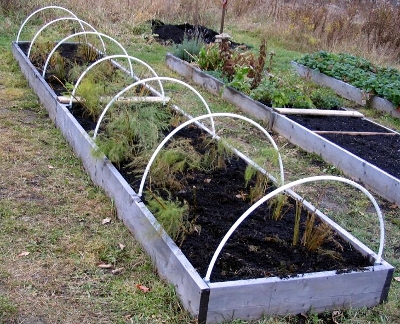 What books about food gardening do you have on your bookshelf?

Surprisingly few, mostly because it seems there are few good ones. Most of what is written today seems to be written by editors rather than gardeners. The information is collected from other sources rather than from first hand experience. Here are some good ones that we have: 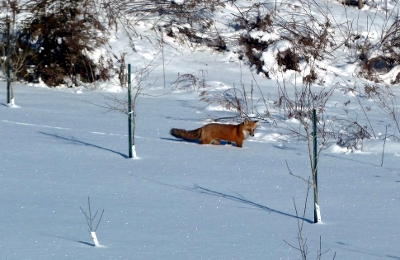 (All pictures are republished with permission from Mike Higgs)

How about you? Are you collecting seeds, or have you just planted your first seed from the store? … somewhere in between? Please leave your comment below.

6 comments on “Interview with Mike Higgs from Canada: We Like to Experiment”