I finally found time to rotovate this weekend, but man is this soil compacted! This is what you get when heavy vehicles compact the soil when building or working on the house. It was raw lawn, that I converted to vegetable garden soil, but I have lost count of how many times I drove over it with the rotovator. 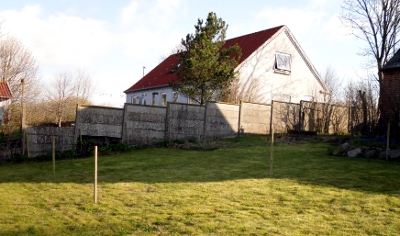 Initially, it was just moss, which flew around a bit, and then gradually the rotovator dug itself down into the lawn. 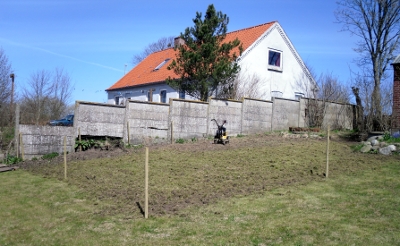 After 4 or 5 rounds this way, I decided that now I wanted to get to the bottom, and then things started to slow down. 1 minute per meter or something like that. Yawn… I let the rotovator dig a small hole and work its way down, and then just a little nudge to help it out of the hole and on to new raw lawn. Now the wheels of the rotovator rested in the hole and held it back while I let it dig a new hole. Hours later I rotovated the plot perpendicular to the old track – but the method could still be applied, since the soil was extremely compact. 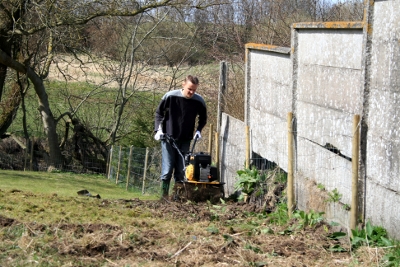 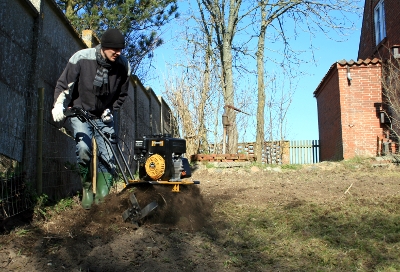 A large tractor mounted with a tiller should be allowed to clean up  after the soil compaction that existed here. But luckily it would not be able to gain access to the plot due to a brick wall and a fence so I had to do it myself. 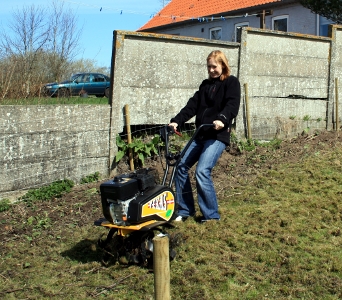 But it is. If you are getting sore muscles, then you’re doing it wrong. Then you can just use a spade and not a rotovator. So it pays to have the patience to learn the techniques. But it sure is a violent beast to tame, especially if you’re used to working in an office.)

Later on I started raking the soil. My daughter suddenly stood nearby looking very interested at the newly raked soil – and in that moment it dawned on me that I had to do things in the right order. First the fence, then raking. Fence and pressure-treated poles are ready for an idle moment, which hopefully soon will arrive before the plot turns green from new grass.

(A note on the rotovator: If you take a close look at the last picture, you can probably tell it says ‘Texas’ on the side cover of the rotovator. I just read this morning that this was the nickname of the guy who founded the company many years ago. He travelled from Denmark to Texas (8,000 km / 5,000 miles), got inspired by the machinery he saw there, and went back and created his own company, and that is what we benefit from today.)