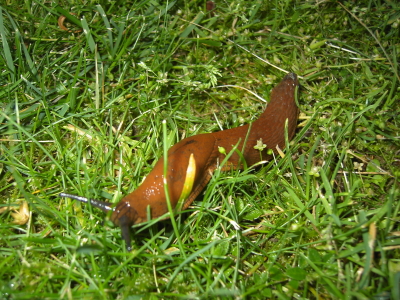 No, it’s not a snake, it’s a big mean old killer slug out to get my vegetables! I can’t seem to get rid of these bastards, and I keep hearing it’s a slow slug year?… I’m a little bit scared.
Anyway, as the old saying goes, keep your friends close, but keep your enemies closer, here’s some background on what went wrong.  (And please tell me if you know how I would be able to keep my vegetables to myself. Maybe this slug story of my garden is getting out of hand 😉 )

Well the Killer Slug is a recent nickname while it’s also called the Spanish Slug or Arion Lusitanicus in Latin. Killer Slugs because they’re cannibals who’ll eat their own kind if they’re weak or dead. That’s why the slug poison with iron phosphate is effective, because the dead slugs are poisonous to the healthy ones. They originally spread from the Iberian Peninsula (Spain, Portugal, Andorra, Gibraltar, France) to Northern Europe in 1900-something via trading routes.

The one in the picture is a fully grown one of about 12 cm (5 inch) and is able to lay up to 800 eggs a year. They are hermaphrodites so a single slug is able to mess up your garden on its own. There are rumors that the Spanish Slugs are mating with the Black Slugs to build up resistance against frost. Expect to see some crazy high voltage razor sharp fences around my garden if that ever happens. 😉