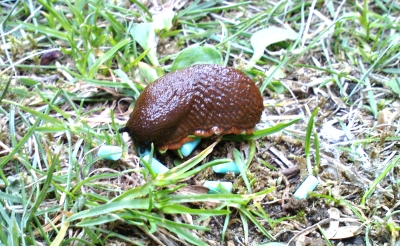 I think I went a little to crazy with the iron phosphate fighting the killer slugs. As a result it’s hard to find just a single slug in the garden now. I scattered the pills along the sides of the raised beds and the other beds, along the hedge, and around the composting boxes. This method was effective. But then again it wasn’t, since the good guys also died and iron phosphate is quite expensive. So I suggest a better approach.

First of all – put out more ducks. This is not a “too-many-slugs”-problem, it’s a “too-few-ducks”-problem. Although it’s possible to do, it’s not practical in the suburbs. Instead I suggest targeting each individual killer slug with about 5 iron phosphate pills. Compared to collecting and boiling them this is more effective, because when slug starts having some “stomach problems” it will go back to the hive and die. Cannibals as they are the other killer slugs eats it and dies too. This won’t happen when you go and boil them.

Furthermore, the good guys is much less likely to come across the pills when you don’t spray the pills all over like a madman. 5 pills per slug is also much cheaper, so that a box of iron phosphate will probably last for years.