This year the summer is buzzing with – in addition to sun and heat – chickens! Thomas has built the finest hen house a couple of years ago that we finally this year will be able to fill up with residents.

Since I have have been looking forward to having chickens in the garden for the last couple of years, I have had time to explore the market a bit.

A hen is no longer just a hen, I found out.

In the wild the hens live in small flocks of between 5 and 10 hens and 1 or 2 roosters and the small chicks of the flock. A ‘pecking order’ exists, which means that there is a clear hierarchy. The rooster is at the top, and under him the individual hens and the chicks at the bottom.

It also means that if there are too many chickens in a flock, they must constantly fight for their rank in the hierarchy, since they can not keep track of all the hens in the flock.

Okay then. I have to start discovering our needs.

Our chickens must be ‘pet’ and ‘utility’ hens. Those that create life in the garden and a kind that can be tamed. In addition, they must provide us with compost and a few eggs every now and then, but they’ll probably not end up – in the cooking pot…

I have no previous experience with chickens, except from my aunt and uncle’s former chicken run, on their farm. They chose the ‘ISA Brown’ kind: 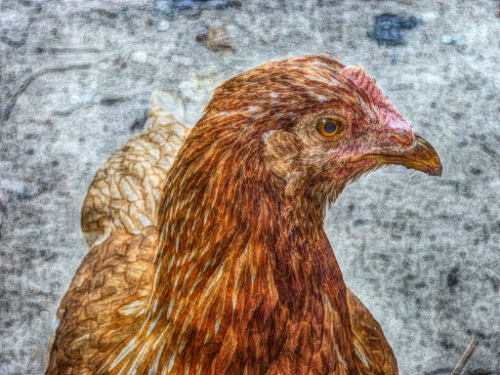 The obvious choice of hen if you want plenty of eggs… A lot of eggs! It is the kind of chicken they use in the industry which are bred to lay eggs. Like several other chicken breeds, they cannot hatch out chickens themselves because it is bred out of them, for practical reasons…

It is not going to be that kind – although we’re probably not getting a rooster – at least not in the beginning (because I want to maintain good neighborly relations). I like the idea that we actually have the opportunity to have the garden filled with small chirping chicks which their mother hen nurture and care for, as well as the fact that the breed has retained some natural contact with the life of ‘being a hen’.

My first choice was Orpington, a large hen, which should be calm and easy to tame: 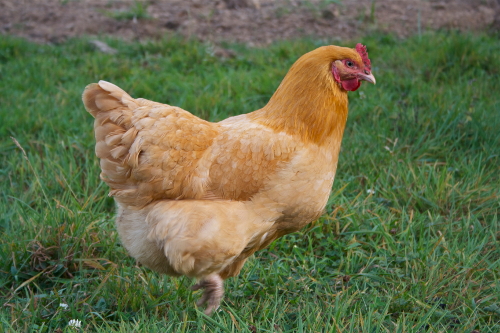 It knows how to hatch out chickens and is a poor flier. The latter is an advantage since the fence doesn’t need to be that high then (who says it all have to be THAT close to nature… 😉 ) Also, I hope that the cat is going to respect it, in virtue of its size, so that both parties can walk peacefully together on the lawn. It works out well in many places – that’s what I’ve have read. But no one has used the Freja cat for testing before – so who knows if it is going to work out well with our little predator cat… If they cannot agree, they have to be content with saying hello to each other through the wire mesh of the chicken run.
As an alternative to Orpington I have thought about Wyandotte, Plymouth Rock, 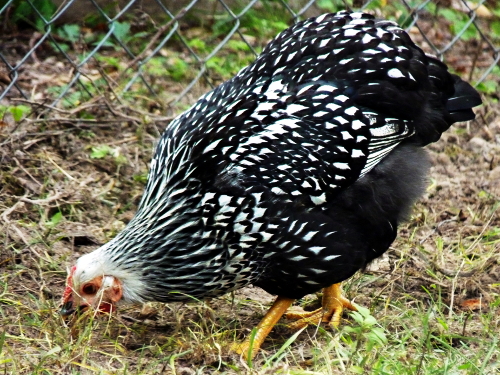 or Sussex, which are large too and reportedly sociable chickens, that can both lay eggs and also taste good (if you’re into that… 😉 )

Still, I’m doubtful… After I read the line: “First, determine which breed of chickens you want and build the chicken coop from that.” After once again having looked at our relatively small chicken coop and the fact that Orpington hens weigh 3.5 kg (7.7 lbs) (4.5 kg (9.9 lbs) if you are a rooster), the coop seems a bit small. I think we should have 3 – 4 hens. It will be natural also to have a rooster, but I opted out as mentioned, since I don’t know if the neighbors (and we) expect crowing from early morning… To remedy this you can isolate the chicken coop and leave the chickens in the coop until after sunrise. So it’s a future option, but in the beginning it will probably only be 3 – 4 ladies who will take over the chicken coop.

The large breeds of chickens are also available as bantams, which instead of 3 – 4 kg weighs approximately 1 kg (2.2 lbs).
It would perhaps be a more obvious choice considering the size of the chicken coop.
The disadvantage of choosing these is that they are better fliers and thus require a higher fence, and that the large hens in general should be more calm and easier to tame, criteria that are heavily weighted in this house 🙂
Because the larger hens are poor fliers, they will also sometimes be able to walk freely on the lawn and beds and eat weed seedlings, snails, etc.
Large hens generate more compost, and that is something especially Thomas likes 🙂
So when weighing the options I have to realize that soon there will be 3 giants strutting around the small chicken coop and future associated chicken run. After all, the coop is not that small 😉