I’m still struggling with my five old apple trees in my garden. If they are left alone they grow like crazy, sending up a massive number of shoots: 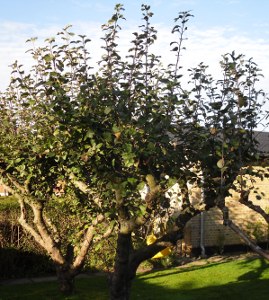 They’ll quickly grow too big for my garden. Maybe if I only had one tree it would fit in the garden, but since they have always been pruned the limited area was never a problem. Last year I pruned them really hard and removed all shoots so only the bare stems were left (thicker than 5 cm / 2 inch in diameter). That resulted in not a single apple being produced. Bad idea.

So this fall I’m leaving a single shoot per stem, hoping that apples will develop on those shoots next year, where they’ll be one year old: 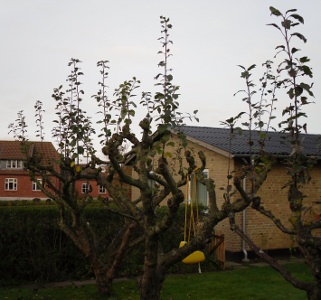 I guess the lesson is that apples won’t develop on wood younger than 1 year.

The ideal situation for me would be to plant an apple tree in a place with lots of space around it, and then forget about it until I would go out and collect the apples. And then let it grow according to its own genes and chop it down once it stopped producing apples.

When you start pruning hard it’s like you can’t go back to free growth without letting the tree grow into a big mess. So I have to live with the decision of the former owners and learn how to prune properly, as I don’t want to chop the trees down, since that would force me to go to the supermarket instead.