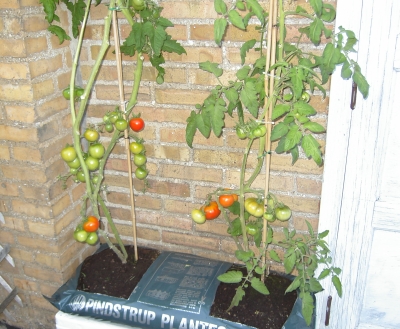 Yes! The first tomatoes are finally ripe. They’re late because the ones I originally planted were cut down by killer slugs. That was a tough one since those original ones I sowed indoor where they germinated in my windowsill and grew up to become sound 20 cm (8 inch) plants. I’m not sure what to do to keep the killer slugs away from my small tomato plants next year, I’ll have to figure that out.

It was just before vacation I lost the original ones, but a friend looking after the garden in the meantime played a prank on me. He found some new plants at the supermarket which were even taller and planted them instead of the slaughtered ones. He didn’t say a word about it until weeks later after we got home from vacation, and I didn’t tell him that I knew what he did. But of course I knew, they were my small babies. So I don’t actually know what varieties I’m growing, the ones you see in the picture 😉 I would like to try to save seeds from tomatoes but I don’t think I’ll do it this year since I don’t know what they are. But they’re healthy and the taste is okay. We only tasted the variety on the left so far, the one on the right is a beef tomato.

There are not many leaves left on the plants, because I have worked from the principle that if any leaves are casting shadows on any of the fruits, the leaves have to go so that the sunshine can reach the fruits. I’ve also pinched any shoots appearing between the main stem and the side branches to keep the fruit production high. Those shoots will not produce much fruit. Next year I’ll try and limit the plants to having only one main stem per plant. They are sensitive to the wind as they are now, so I hope that they will be more stable with only one stem.

I’m using a growing bag which I’m sure is filled with all kinds of nutrients. It works well but in the long run I would like to use my own compost just to live a little more self-sufficient. Besides, I’ve read that tomatoes should be able to grow in almost anything, so I think it should be possible to do.

The self-watering box I use below the growing bag is very good at providing the soil with the right amount of water at all times. I’m considering buying two more and digging holes for them in the ground, so that they are out of sight. The cats are using the box like a scratching pole which is not a pretty sight and it won’t last long either.