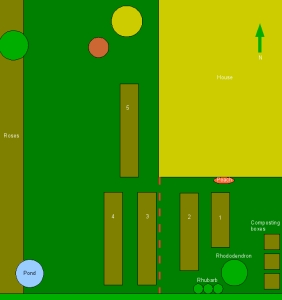 This is an overview of my garden as it looks in 2008. There are five beds of which two are raised beds. The remaining three beds are raised bed wannabes meaning that the width is the same as the raised beds 120 cm (47 inches) and the soil has been dug deep. I just need to build wooden frames and add to the beds as much soil above ground as there is below ground. Bed 1 and 2 were also in use last year. Bed 3, 4 and 5 were added this year:

The good things about this garden are that the beds are located on the south side of the house so the plants receives most of the sunlight available. It’s also really an advantage to have the composting boxes near the beds, because of the many trips back and forth with waste. And the pond with the small fountain is creating a relaxing atmosphere.

There are some room for improvements though. We live about 25 km from the west coast of Denmark and from the coast there’s about 1000 km of open sea before reaching Scotland. The wind often builds up here and is quite harsh on the vegetables and fruits on the trees, coming in from the west (left in the picture). I need to put up a hedge from the corner of the house to stop the wind (dotted red line), but that means I’ll have to move bed 3 and 4 to the left (damn, more hard work 😉 The ground is suffering from soil compaction and is full of clay).
The peach tree is placed on the south facing wall which turned out to be a bad idea. The spot is relatively warm. Therefore flowers is put out early and later surprised by late frost causing them damage.