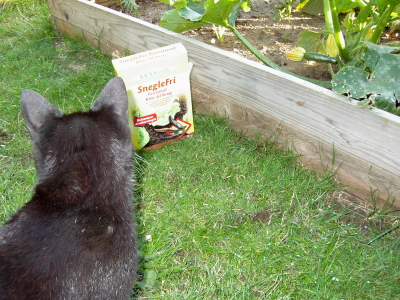 Killer slugs can be really hard on the vegetables. I’ve read that it’s not slug problem – it’s a duck problem. If there are too few ducks in the area the slug population will explode. It sure did in this area, and I’m not going to put out ducks, since the plot is located in the suburbs. So what to do?

It seems that I’ve got the slugs under control now, although I don’t like killing them. There’s always the possibility of collecting them late in the evening and terminate their slimy life with a really hot bath (like in boiling hot). This produces a green soup with matching steam, eeew. But they are supposed to die quickly. I usually dump the soup in the sewer out in the road. Some people dig a hole to dump it in, but if you are out there boiling slugs every evening for months you need a big plot for all those holes.

Others cut the slugs in two with a pair of scissors, but if you kill 30 or more each night my guess is that it will get pretty gross and not much fun to work around the crops. I did collect and boil a lot through the spring, and now I’ve started putting out “poison” (Ferramol). It’s only poisonous to the slugs, since all of the ingredients are used in human food too. Finally the slug population is going down leaving the tagetes alone to do their job.